Biking and Camping the Katy Trail

The Katy trail is an old rail road that has been transformed into a bike trail in Missouri. It stretches across over half the state going from Clinton, MO to Machens, MO. From start to finish the trail is a total of 237 miles. A large part of the trail follows Lewis and Clark's expedition along the Missouri River. It is truly breathtaking.

Laura and Grant starting their adventure in Pilot Grove

In October 2015, Grant and I took a three day weekend to bike and camp along the trail. We rode our bikes from Pilot Grove to Huntsdale and back. Which totals 32 miles one way making it a total of 64 miles in two days. One day, when we have the time and are in better biking shape, (I am much newer to biking than Grant) we plan to bike the entire trail.

Planning the Trip
Originally we learned about the trail from a brochure at a local bike shop. I started doing more research and the best website for information was bikekatytrail.com. The website has tons of information about the trail and really helped us plan our trip.

What to Bring
The key to a successful biking trip is to pack light because everything you have has to be carried on your bike or you. This is what we took with us:


Everything we brought fit in two backpacks and on our bikes. We did not purchase bike bags due to the price but we will be getting them before the next bike adventure we go on! Our backs and shoulders were extremely sore by the end of the trip. I would highly recommend them, your back will thank you!

Where to Stay
We decided to camp along the trail but there are many other sleeping options if camping is not your style. The night before we started our biking excursion we stayed at the Missouri State Fairgrounds in Sadalia, MO. It was very reasonably priced at $10. The facilities were nice and the campgrounds were well lit. We also saw other tents with bikes, so we felt safe. The second night, after a day of biking the Katy Trail, we stayed at Katfish Katy's in Huntsdale, MO. This campsite was $20 but had hot showers. The showers were hot but if bugs are a deal breaker, then find another place to shower! Overall, this campsite was worth it because of the view. We camped right next to the Missouri River and the view was breathtaking.

What to Eat
The first day we ate lunch at Breadeaux Pizza in Boonville, MO. It was a short distance from the trail and they had an amazing lunch buffet. The pizza was great and reasonably priced. For dinner we ate at Rocheport General Store in Rocheport, MO. The food was great and on Friday and Saturday nights they even have live music. They also serve delicious ice cream, which we got for a snack the second day. For breakfast we packed fruit and granola bars to eat since it was more convenient than biking to find food. We ate lunch at Les Bourgeois Winery & Bistro. The restaurant was about 1/4 mile hike up to the top of the cliff from the trail but was absolutely worth it. The view of the Missouri River Valley was absolutely stunning. We got to eat and sample wine from the patio to enjoy it! I would highly recommend going! For dinner that night we stopped at a gas station in Boonville, MO because we were running short on time.

The Adventure
Our day started in Sedalia, MO where we stayed the night. We then drove to Pilot Grove to start our biking trip along the Katy Trail.

Between Pilot Grove and  Boonville

Tunnel between Pilot Grove and Boonville

The old railroad station in Boonville

Rocheport is an extremely neat town. If  only biking a few miles of the Katy Trail interests you, this is your place. You can rent bikes from the bike shop right on the trail as well as see some pretty
amazing views. During this portion of the trail, near Rocheport, is where you can see exactly where Lewis and Clark's expedition took them. There are also some really neat hieroglyphs on the cliffs surrounding the area.

View while biking to Huntsdale on the Katy Trail

We stayed in Huntsdale and headed back to the car the next day. To start the day, we met a man that was camping next to us that had a dug out canoe and was traveling down the Missouri in it. He was awesome! We biked some more, drank wine, and had an ice cream snack all before mid afternoon!  We had intended on camping in New Franklin that night, but then Grant accidentally left his phone on a bridge. Before we realized we had already biked 7 miles away and had arrived in New Franklin. Grant unloaded his bike and went back to look for it. He never did find it. After that we were a little discouraged and decided to head back to the car. We still had a ways to go and nighttime was quickly approaching. We did not make it back to the car before sunset and found ourselves biking in the complete dark. To be frank, I was completely terrified and exhausted. Thankfully, Grant stayed strong for the two of us and we made it back safely. It was truly an adventure to never forget!

Going back through the tunnel near Rocheport

The bridge where Grant lost his phone

Grain elevator along the trail

Posted by Unknown at 11:37 PM No comments:
Email ThisBlogThis!Share to TwitterShare to FacebookShare to Pinterest

Why I Want to Start a Travel Blog

There seems to be two type of women in their mid 20s:
1. Married with kids or planning to start a family in the near future
2. Single and searching for something, like adventure, a relationship, yourself, etc.
I don't belong to either of these groups exclusively but find myself somewhere in the middle.

I am 25 years old and I found the love of my life at 16. I honestly would not have it any other way. We have nearly been married for 2 years and we constantly dodge "baby" questions from friends and family. I am sure there are other couples who experience this same thing but they seem to be a minority. Although I am not single, I still am searching. I am searching for adventure and myself. I truly believe that we are ever changing and we are always looking to "find" ourselves.  I feel that I am most "myself" when I experience something new.

This leaves me in between married with kids and single and searching. I'm married but still searching. Which leads me to why I would like to start a travel blog.

Something Different
Most blogs that are written by women in their mid 20s will be far different than mine. Many of those women are single and off traveling the world by themselves. They share wonderful experiences of quitting their jobs and leaving it all behind to travel the world. While these women are brave and live seriously amazing lives, that's not me. I value having a steady job that will offer me security but I still have that wanderlust.

For Me
Even if no one else ever reads my blog that is perfectly fine with me. I would love to share my experiences with anyone that will listen but truly this is for me. By writing and sharing pictures about my breathtaking adventures, I will be able to relive these wonderful memories for many years to come.

Help Others Plan
Planning an adventure is hard, especially if it is not a common place. Some of the more remote locations we have been to did not offer much information before hand. Some of theses trips could have gone a lot smoother if I had tips and advice before hand. 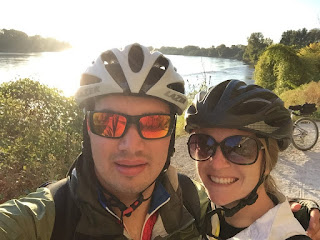